Access to real-time object location data provides the basis for more efficient processes and sustainable business. For example, real-time localization allows machines and equipment to be used more effectively and employees to be guided safely through industrial halls. A practical use case in this context is, for example, indoor navigation via augmented reality (AR) application. Such use cases in particular are being used more and more frequently and extensively by companies. The reasons for this are current technology developments as well as further developments in the field of wireless sensors, communication technologies and sensor networks with regard to the Internet of Things and Industry 4.0. 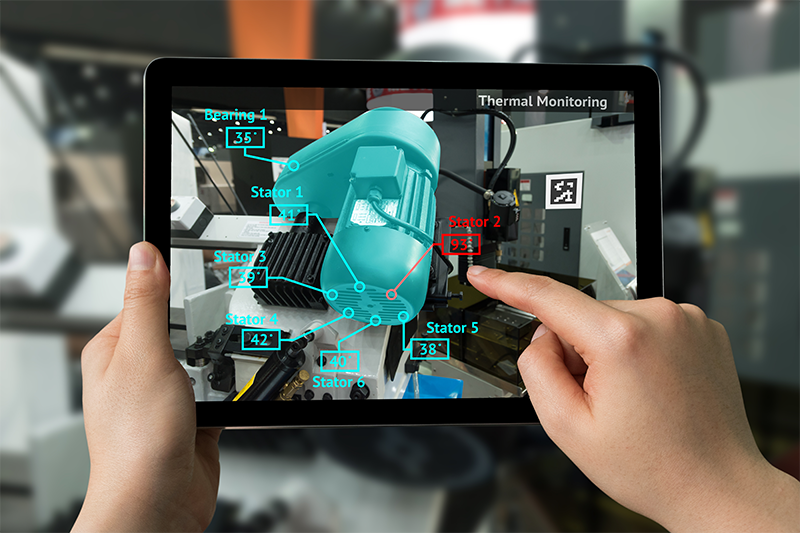 Standardized indoor localization with omlox - exact localization for augmented reality applications in the field of Industry 4.0

Augmented reality, also known as AR, has been around since the 1970s when it was first introduced in pilot helmets and general industrial purpose since 1990. The technology consists superimposes computer graphics onto a user’s real-world perspective. The computer image could be real, entirely simulated or potentially exist in the past/future. Superimposing this information on the current perspective of the user enables seamless target/actual comparisons e.g digital plan on existing inventory.

Technological advancements have enabled widespread adoption, e.g., 150,000 AR glasses were sold in 2016, and 22.8 million expected in 2021. Wireless sensor technology is set to play a crucial role in IoT and industry 4.0. Also, 5G and 6G will enable cloud-based AR with small and economical end user devices. The AR display could use different types of devices, namely smart phones, tablets, smart glasses or even projection-based devices.

The other crucial aspect is the localization of the display, where the latter’s 3D coordinates are used to ensure the spatial accuracy of the superimposed image on the real-world view.  Also, of high importance, is the orientation and motion of the display.

Outdoor positioning is done by GNSS (Global Navigation Satellite System) but is limited to outdoor scenarios. Indoor positioning is dependent on signal strength and radio signals, e.g. WLAN (AP), Bluetooth Beacons provided there are low accuracy requirements. Higher than 1 meter accuracy can be achieved using Ultra Wide Band (UWB). Other methods use ultrasound or light modulation. Dynamic (PDR) or Dead Reconing could also be used which uses a combination of compass, pedometer, acceleration and rotation angle sensors. Localization using 3D point clouds or Simultaneous Localization and mapping (SLAM) can be done by LiDAR or cameras.

On the one hand, tracking program libraries could either be closed and paid solution which may or may not supply their own software development kits (SDK) e.g. Azure Custom Vision, CDMTracker, VisionLib, Vuforia, Wikitude, etc. On the other hand, some popular opensource libraries are: (ARToolkit, OpenCV, AR.js, DroidAR.etc)

Complex visualizations such as a Building Information Model (BIM) can only be performed by outsourcing computational processes. ARTwin project partner Holo-Light contributes its XR streaming solution ISAR. This enables support for big data content such as graphics-intensive 3D objects or 3D CAD models. ARTwin offers broad use cases for the smart factory, for example, planned pipelines, machines and assemblies can be visualized and manipulated directly at their intended destination.

Real Time location Systems (RTLS) makes the use of machines and equipment more efficient, safe and economical. Historical hindrances to RTLS data acquisition have been:

The revolutionary and innovative open locating standard (www.omlox.com) greatly alleviates the aforementioned issues. It transfers all positioning data into a uniform coordinate system as well as enables open self-location indoors. It is maintained by the non-profit industrial association Profibus International (PI), Karlsruhe. The association comprises 1,700 members worldwide, in 27 regional associations, which defines standards in a pre-competitive and vendor-neutral manner.

omlox provides a standardized so-called “air-interface” within the UWB based central locating zone (omlox core zone). The standardized air-interface enables interoperability between hardware components within the core zone. The interfaces between the locating applications and the locating zones to the “omlox hub”, a middleware that unifies all locating data into one coordinate system, which is also standardized by the hub API”. This decouples software applications from RTLS technologies and their vendors. It aggregates location data and puts it into a unified data format. This simplifies the integration of location technologies into applications and enables any combination of technologies and vendors.

omlox prevents vendor lock-in and allows users to combine different suppliers for either different zones e.g., indoor vs outdoor, or even different suppliers in the same locating zone via the air-interface. Significant reductions are achieved in terms of reduced and faster infrastructure deployment e.g., software, database, training, and administrative costs. In parallel, the omlox core zone provides very accurate and fast locating data, being impervious to metallic obstruction and lack of direct line of sight.

Opportunities for AR/VR/XR through omlox

Omlox allows real-time and absolute RTLS data for AR devices, opening up a multitude of new use cases. Cross-vendor usability within the omlox core-zone means each manufacturer can implement its own services (so-called location-based services) based on the standardized interface. Via the omlox Hub API the content for AR is delivered and via the omlox air-interface the absolute self-positioning of the AR device can be done in seconds.

This  indoor self-location complimented by omlox can allow navigation data to be displayed on head-up displays or AR devices. In order to achieve the desired smooth user-experience, the AR devices will preferably do a sensor-fusion of the omlox absolute self-location with the fast and accurate relative tracking which is typically in use in todays AR displays. Therefore, localization happens instantly after switching on (omlox core zone) and the AR application can consume relevant real-time movement data of its surrounding via the omlox hub. Context-related sensory data could further enhance the user experience.

One well known limiting factor for AR is the large amount of data generated and needed to be processed. This is compounded with the limited processing capability of mobile devices, smart glasses for example. Omlox effectively bypasses this bottleneck using ISAR. The latter is the XR streaming solution provided by Holo-Light. ISAR SDK enables remote computing for AR and streaming directly to AR display via selected and secure cloud server. This SDK can directly be integrated with an AR App. The result is real-time streaming of AR content such as 3D machine and live location data in a high level of detail and complexity.

XR streaming outsources computational load to remote central servers. The central servers integrated into the omlox core zone with HoloLens 2 AR glasses; enabling optimal performance and even having provisions of other end devices like Android and IOS devices with ease.

Among other things, security and privacy is always of major concern. Which is why the complete streaming of AR application eliminates the need to store privacy sensitive data at location. The customer has full control where and how their tracking data is located. "The combination of omlox indoor navigation with the AR application revolutionizes spatial visualization: no need to attach QR markers, no complex and cost-intensive preparations of the hall and a positioning accuracy that is significantly higher than comparable systems," says Eberhard Wahl, working group leader use cases of omlox and CEO of TRUMPF Tracking Technologies GmbH, provider of the omlox core zone infrastructure.